Today, we, the Tokio team, are announcing the initial release of Tokio Console (Github), enabling Rust developers to gain deeper insight into the runtime behavior of their applications.

And just like that, we get to peek under the hood. —niedzejkob

Tokio Console is a diagnostics and debugging tool for asynchronous Rust programs. It gives you a live, easy-to-navigate view into the program's tasks and resources, summarizing both their current status and their historical behavior.

Until now, understanding the state of an async runtime has required developers to interpret event logs. Frameworks like tracing provide tools for instrumenting programs and querying the resulting output, but it is non-trivial to know what queries to use, and how to interpret the output. For example, if you are not familiar with the source code of Tokio, you won't necessarily know which tracing events to look for, nor what those events mean.

tokio-console solves this problem by providing a presentation of the async runtime that is described in terms already familiar to the async developer: the set of tasks being polled by the async runtime, and the resources that each task acquires or releases as it services requests. You do not need to write any new instrumentation logic: just one line of code to enable Tokio Console suffices, and after that, you use the provided terminal tool to observe the async runtime.

tokio-console brings odd behaviors to the forefront. You can sort the tasks by metrics such as total busy time or number of polls. The console helps out by highlighting big differences, such as shifts from milliseconds to seconds. 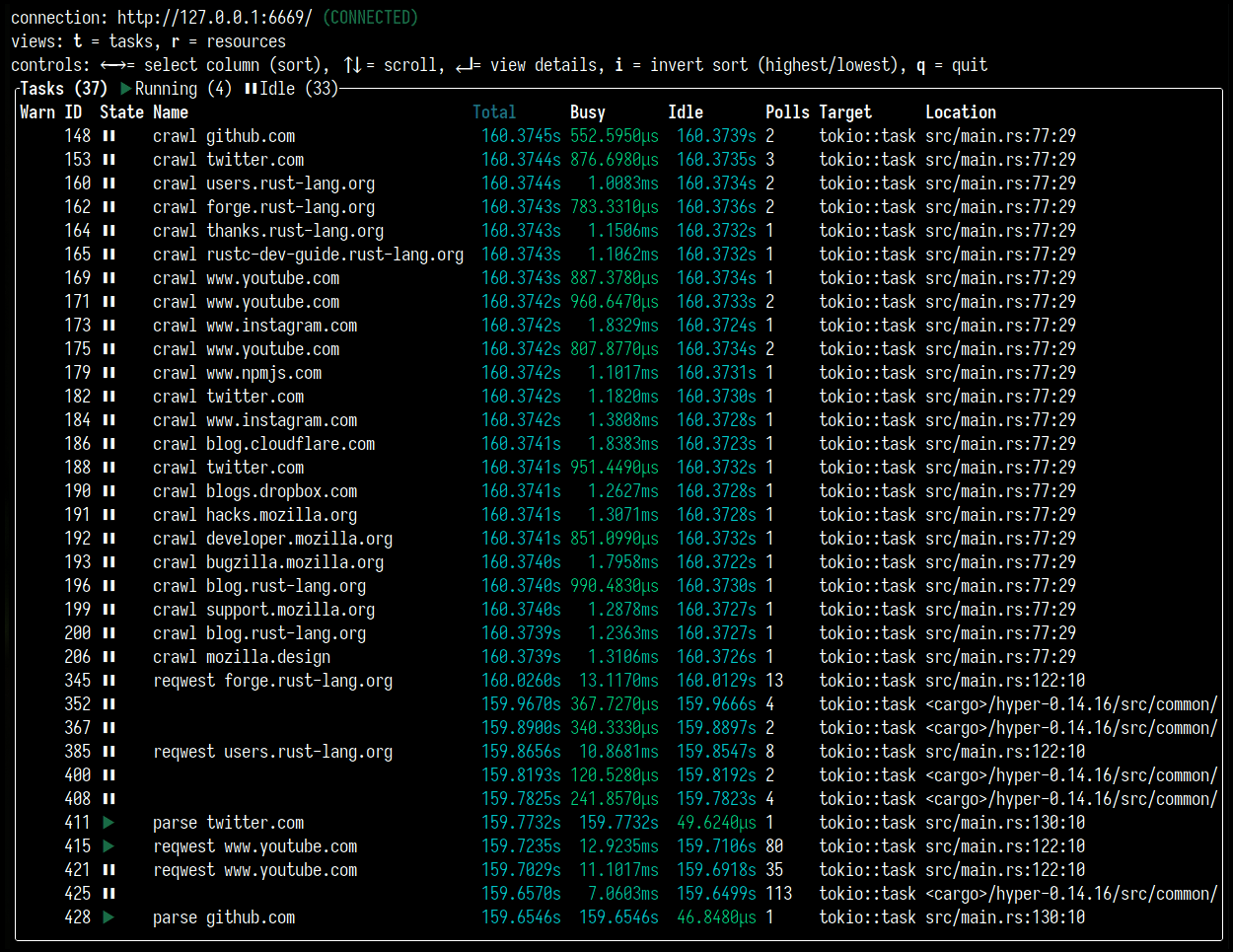 In addition to displaying data, the console implements a "warnings" system. You can think of this as like clippy for async code. By monitoring the runtime operation of tasks in the application, the console can detect patterns of behavior that might suggest a bug or performance issue, and highlight them for the user to analyse. This allows us to detect things like tasks that have run for a very long time without yielding, tasks that have woken themselves more times than they've been woken by other tasks, and more. All of these behaviors are impossible to detect at compile-time — there's no way for clippy or rustc to add lints for them — but by watching runtime behavior, we can detect them very easily.

Adding the console-subscriber crate exposes the instrumentation already built into the Tokio runtime, so you do not need to write any new instrumentation logic. (Of course, you can tailor the console output — for example, by explicitly naming your tasks — if desired.) After initialization, you can use the tokio-console terminal application to directly see what tasks are running and how they are being scheduled by the async runtime.

We can use this data to view extremely rich data about each individual task, such as a histogram of poll durations:

Tokio Console goes beyond just listing tasks. It will also instrument resources, such as async mutexes and semaphores. Tokio Console's resource details view shows you which tasks have entered a critical section, and which tasks are waiting to obtain access. 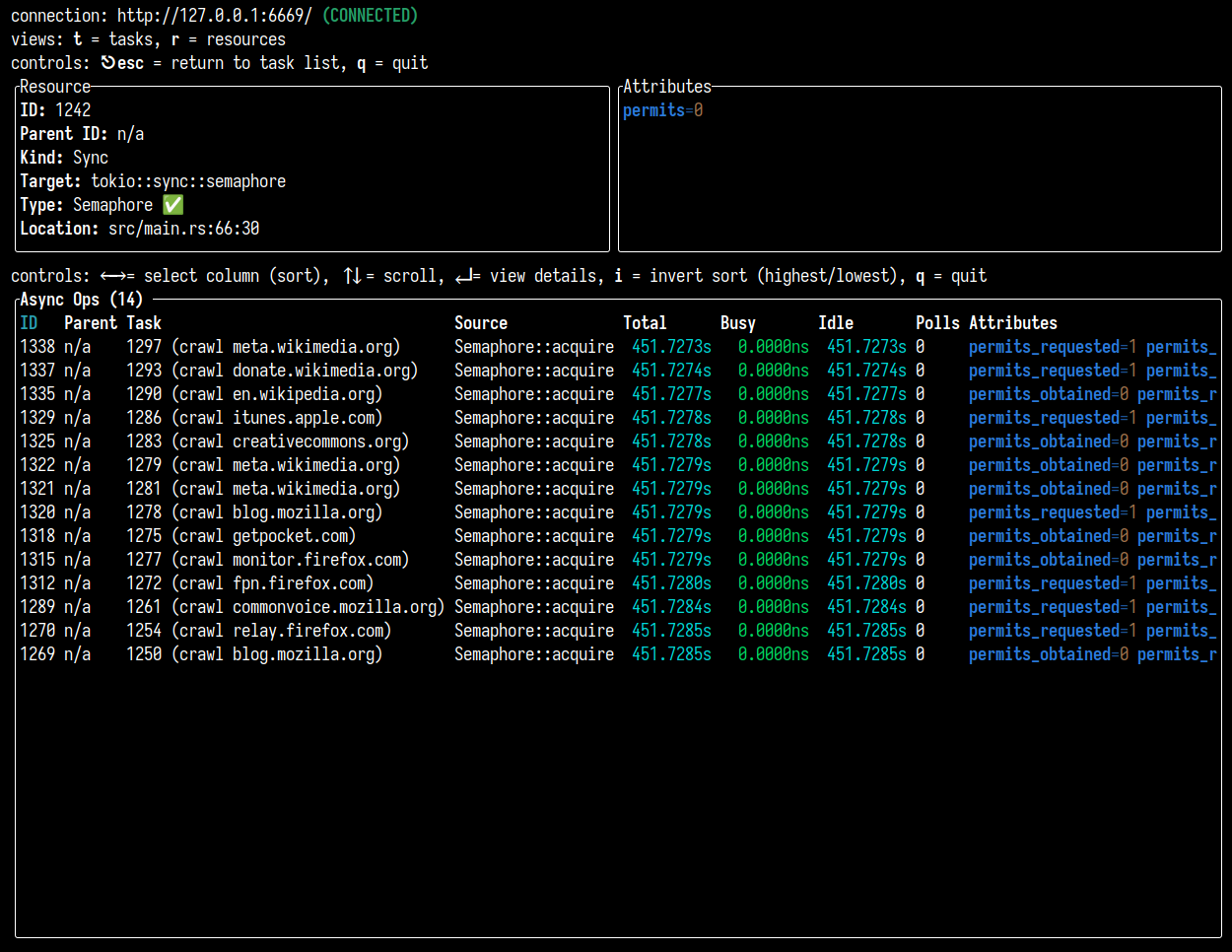 While debugging a particularly mysterious issue related to a task not making progress as expected, tokio-console was able to immediately surface that a lack of wake-ups was the cause, providing insight that ultimately lead to discovering unexpected scheduling behavior with Tokio.

To get started with the console, run cargo install tokio-console, then follow the instructions to add console-subscriber to your async application:

Once your application is running, you can connect to it by running tokio-console in a terminal.

See the tokio-console documentation for details on how to use the console terminal application.

Because this is an early release, the instrumentation of the Tokio runtime has not yet been stabilized. You can enable it by compiling Tokio with the unstable environment variable set: RUSTFLAGS="--cfg tokio_unstable" cargo build. See the subscriber documentation for more details.

This release of Tokio Console is just the beginning. While we think it already is very useful to help debug async Rust applications, we have much more planned (e.g. #96, #130, #155, and #161). First, we will be adding more instrumentation, both in Tokio and other ecosystem libraries. This will help you get even more insight into your applications. We also want to improve the warning system: adding more warnings, and adding searchable, online documentation describing various warnings and how they can be solved (#181, #148). Furthermore, there is a lot more we can do with the data the console collects now: we would love to add new visualizations, like a tree of tasks and their parents (#155) or a timeline of the program's execution (#129).

To do all this, however, we need you to start using Tokio Console and provide feedback. In particular, we want to gather as much information as possible about the problems people are using the console to debug, and what tools we can provide to help. We would also love to get you involved in helping us build the future of runtime diagnostics for Rust, so be sure to say hi in the #console channel on Discord and always feel free to jump in on issues and send pull requests our way!

Also, a very special thank-you to Matthias Prechtl (@matprec), whose 2019 Google Summer of Code project to implement an initial console prototype paved the way for the current Tokio Console release!

tokio-console is built upon a foundation laid by the Tracing and Tonic libraries.

We are indebted to everyone who has contributed to this project, and to all our early users who have been trying it out in your applications and giving us invaluable feedback!

If you want to help us make tokio-console even better, take a look at our github repository, or come talk to us at the #console channel on Tokio's Discord!